Guadalhorce Golf Club is an ancient country estate which dates back to the 16th century. At the beginning of the 19th century, the Larios family converted its original country house into a stately mansion with English influences. In 1987, a group of golfers from Malaga created a Society to set up a private golf course later being joined by a number of Finnish people and together they took the project forward and this private Spanish-Finnish golf course was born.

The course has two distinct parts: the front nine is of typical English “parkland” design without water that extends through gentle hills and level fairways that is easy to walk on a hot summer’s day. On the back nine the land has been sculptured to create raised greens and diversify the fairways. Here water comes into play on several holes and the whole course has a great variety of trees, both native and some newly introduced, and several lakes. 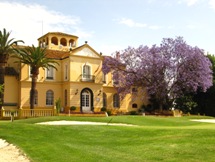